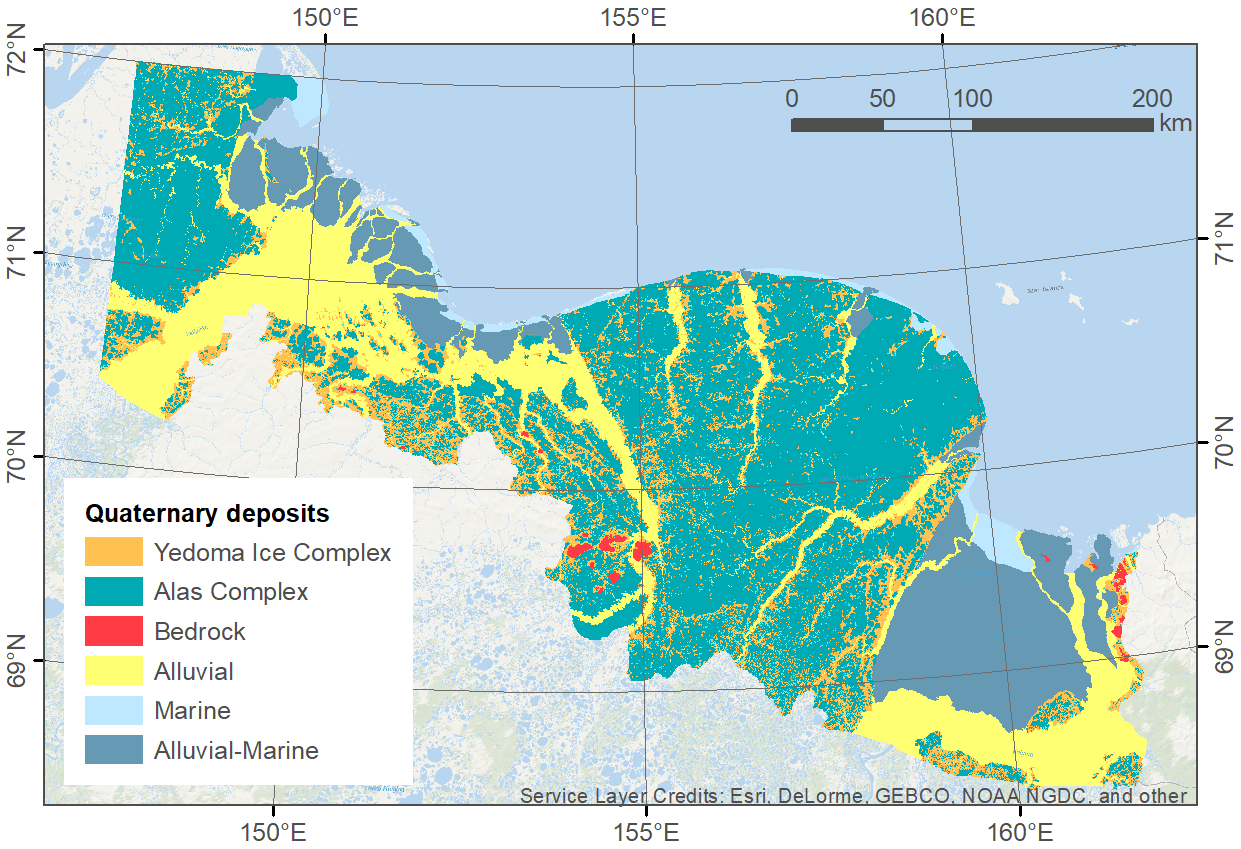 The Quaternary geology map was created for the Yana-Indigirka (eastern part) and Kolyma lowlands, tundra and partly forest-tundra zones. The map corresponds to the nomenclature sheet of Government Geological Map R-(55)-57, northern part. The primary goal for creating the map is to enhance current knowledge of Quaternary deposits distribution in Yedoma regions in North-Eastern Siberia due to the lack of the geological maps of large scale for this region. For most area of the region maps of 1:200.000 scale are still not created and only geological maps of 1:1.000.000 scale exist. The Database of Quaternary Deposits from Maps of 1:1.000.000 scale, East and Central Siberia, is available via https://apgc.awi.de (Bryant et al., 2017, https://doi.org/10.5066/F7VT1Q89).

The main Quaternary deposits on the Yana-Indigirka and Kolyma lowlands are late Pleistocene ice-rich Yedoma Ice Complex (LIII2-4), corresponded to yedoma uplands, and Holocene Alas Complexes (lbIV) formed in drained thermokarst lake basins (alases) due to the Yedoma IC thawing in the late Pleistocene-Holocene. High ice-rich Yedoma Ice Complex (IC) deposits are very vulnerable to observed climate warming, which lead to the landscape changes such as surface subsidence, thermokarst and thermoerosion processes activation, deepening of the active layer thickness, etc., as well as to remobilization of the buried freezelocked organic matter and contribution to greenhouse gases fluxes to the atmosphere.

The map was created using Landsat images that allow the area of the yedoma uplands and alases to be clearly identified. The mapping of Quaternary deposits was done using Landsat TM 5 and 7 ETM+ satellite images acquired from August and July for the 2001-2010 period. Detecting of Quaternary deposits corresponded to landforms were conducted manually using spectral characteristics of satellite images, landform morphology, absolute heights and existing Quaternary Geology map of 1:1.000.000 scale. The working scale of the mapping was 1:30.000.

The Landsat-based map corresponds to 1:200.000 scale and provides important information about the distribution of yedoma uplands and thermokarst development during Holocene and is the basis for the analysis of yedoma-alas landscapes changes under modern climate warming. Detailed information about methods and results can be found in Veremeeva&Glushkova (2016) and Shmelev et al. (2017).