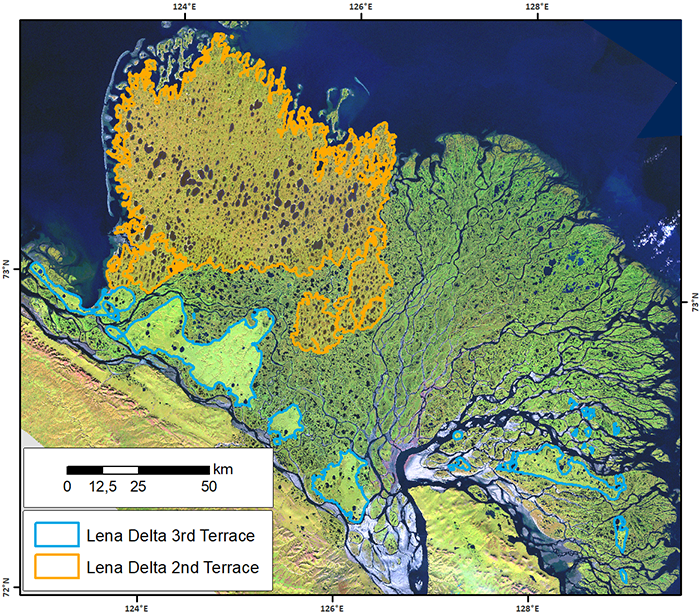 This data set provides a detailed inventory of lakes in the Lena Delta, northern Siberia, with respect to the lakes' association with one of the three geomorphological main terraces of the Lena Delta. The inventory is based on Landsat-7 ETM+ image data and spatial analysis in a Geographical Information System (GIS). Several morphometric lake attributes were determined from the resulting dataset and statistically analyzed. Significant differences in the morphometric lake characteristics allowed the distinction of a mean lake type for each main terrace. The lake types reflect the special lithological and cryolithological conditions and geomorphological processes prevailing on each terrace. In Morgenstern et al. (2008), special focus was laid on the investigation of lake orientation and the discussion of possible mechanisms for the evolution of the second terrace's oriented lakes.

The lake data sets were automatically extracted from a Landsat 7 ETM+ mosaic of the Lena delta (Schneider et al. 2009) by using grey-level thresholding of band 5 (Morgenstern et al., 2008). On the second terrace in the western Lena Delta, several coalesced lakes occur, which is obvious from deep basins divided by flat underwater ridges, some of them cut by deeper channels beneath the present lake water level. As our analyses were aimed on lake genesis, we manually divided the coalesced lakes (n=51) along the middle line of the ridges into their single basins and treated each basin as an individual lake (n=120 of which n=17 < 20 ha were excluded from further analysis). The second geomorphological terrace of the Lena River Delta was modified from Röhr (2001) on the basis of a Landsat 7 ETM+ mosaic (Schneider et al., 2009) with expert advice from Mikhail N. Grigoriev (Morgenstern et al., 2008). The third geomorphological terrace of the Lena River Delta was manually digitized by Guido Grosse, AWI Potsdam, based on Landsat 7 ETM+ data of the Lena delta, then modified by Anne Morgenstern with field and expert advice from Mikhail N. Grigoriev (Morgenstern et al., 2008).