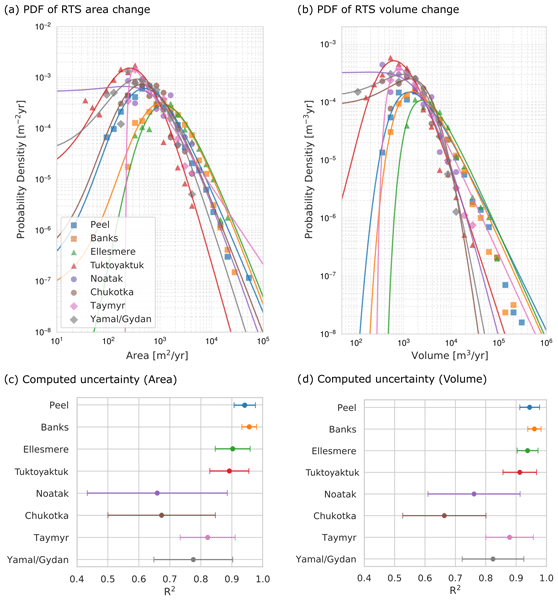 Arctic ice-rich permafrost is becoming increasingly vulnerable to terrain-altering thermokarst, and among the most rapid and dramatic of these changes are retrogressive thaw slumps (RTSs). They initiate when ice-rich soils are exposed and thaw, leading to the formation of a steep headwall which retreats during the summer months. The impacts and the distribution and scaling laws governing RTS changes within and between regions are unknown. Using TanDEM-X-derived digital elevation models, we estimated RTS volume and area changes over a 5-year time period from winter 2011/12 to winter 2016/17 and used for the first time probability density functions to describe their distributions. We found that over this time period all 1853 RTSs mobilized a combined volume of 17×10⁶ m³ yr⁻¹, corresponding to a volumetric change density of 77 m³ yr⁻¹ km⁻². Our remote sensing data reveal inter-regional differences in mobilized volumes, scaling laws, and terrain controls. The distributions of RTS area and volumetric change rates follow an inverse gamma function with a distinct peak and an exponential decrease for the largest RTSs. We found that the distributions in the high Arctic are shifted towards larger values than at other study sites We observed that the area-to-volume scaling was well described by a power law with an exponent of 1.15 across all study sites; however the individual sites had scaling exponents ranging from 1.05 to 1.37, indicating that regional characteristics need to be taken into account when estimating RTS volumetric changes from area changes. Among the terrain controls on RTS distributions that we examined, which included slope, adjacency to waterbodies, and aspect, the latter showed the greatest but regionally variable association with RTS occurrence. Accounting for the observed regional differences in volumetric change distributions, scaling relations, and terrain controls may enhance the modelling and monitoring of Arctic carbon, nutrient, and sediment cycles.