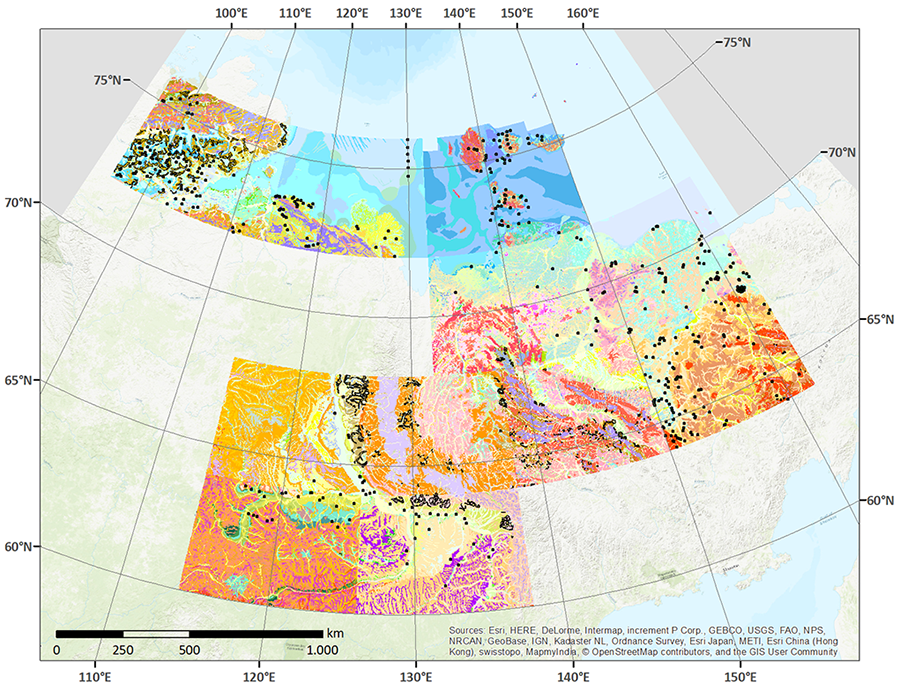 The Open Source project ScienceBase brings together the best information it can find about USGS researchers and offices to show connections to publications, projects, and data. read more

This digital database is the product of collaboration between the U.S. Geological Survey, the Alfred Wegener Institute for Polar and Marine Research Potsdam, Foothill College GeoSpatial Technology Certificate Program, and the Geophysical Institute at the University of Alaska. The primary goal for creating this digital database is to enhance current estimates of organic carbon stored in deep permafrost, in particular Late Pleistocene syngenetic ice-rich loess permafrost deposits, called Yedoma. This deposit is vulnerable to thermokarst and erosion due to natural and anthropogenic disturbances. The original paper maps were issued by the Department of Natural Resources of the Russian Federation or its predecessor the Department of Geology of the Soviet Union and have their foundation in decades of geological field and remote sensing work and mapping at scales 1:50,000 to 1:500,000 by Russian geologists and cartographers in the respective regions. Eleven paper maps were scanned and digitized to record the geology unit boundaries, genetic type and clast size of each geologic unit, and borehole and outcrop locations. We also calculated area in km2, perimeter in km for each polygon. These attributes were used in support of (Grosse and others, 2013) which focused on extracting geologic units interpreted as Yedoma, based on lithology, ground ice conditions, geochronology, geomorphologic, and spatial association.

Uses of this digital geologic map should not violate the spatial resolution of the data. Although the digital form of the data removes the constraint imposed by the scale of a paper map, the detail and accuracy inherent in map scale are also present in the digital data. The data was edited at a scale of 1:1,000,000 and higher resolution information is not present in the dataset. Plotting at scales larger than 1:1,000,000 will not yield greater real detail, although it may reveal fine-scale irregularities below the intended resolution of the database. Similarly, where this database is used in combination with other data of higher resolution, the resolution of the combined output will be limited by the lower resolution of these data. Acknowledgment of the U.S. Geological Survey would be appreciated in products derived from these data.