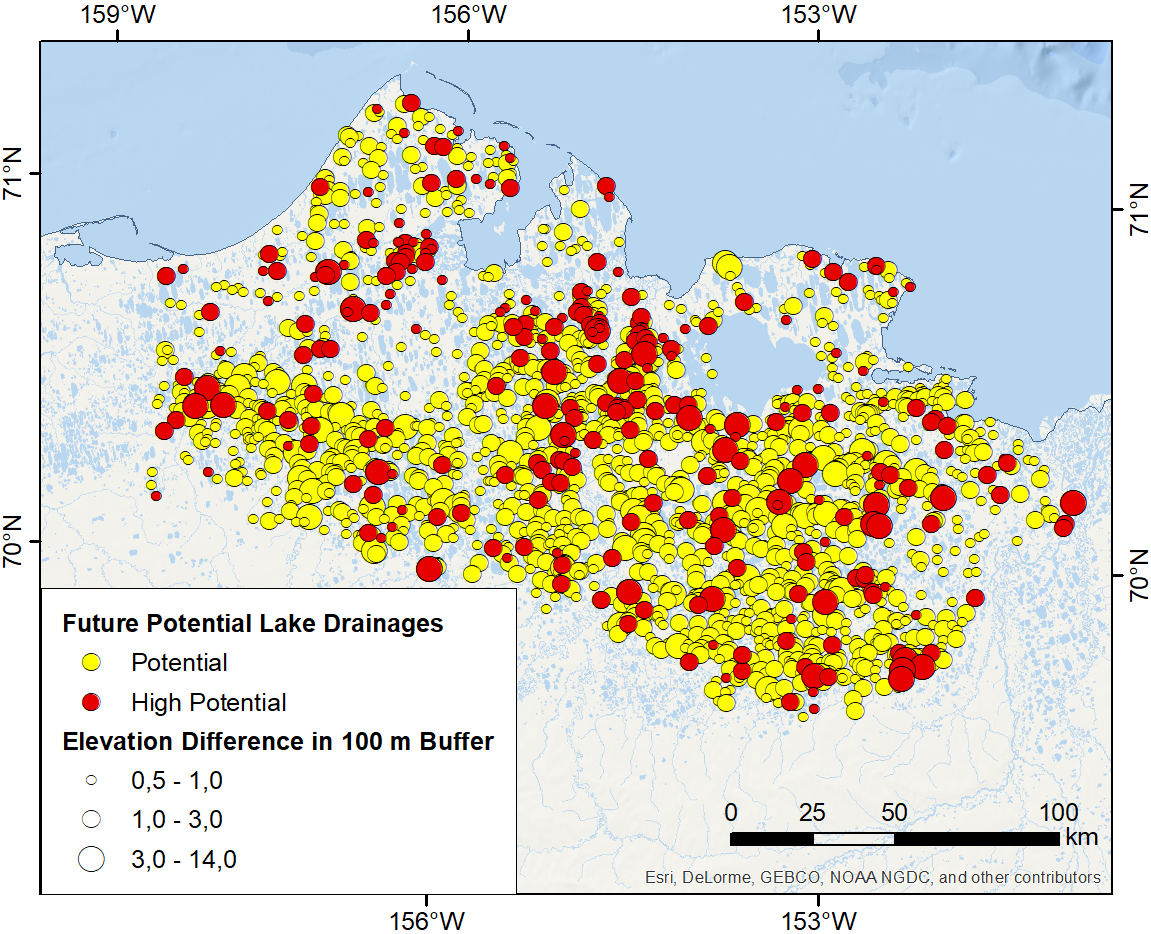 Assessment of lakes for their future potential to drain relied on the 2002/03 airborne Interferometric Synthetic Aperture Radar (IFSAR) Digital Surface Model (DSM) data for the western Arctic Coastal Plain in northern Alaska. Lakes were extracted from the IfSAR DSM using a slope derivative and manual correction (Jones et al., 2017). The vertical uncertainty for correctly detecting lake-based drainage gradients with the IfSAR DSM was defined by comparing surface elevation differences of several overlapping DSM tile edges. This comparison showed standard deviations of elevation between overlapping IfSAR tiles ranging from 0.0 to 0.6 meters (m). Thus, we chose a minimum height difference of 0.6 m to represent a detectable elevation gradient adjacent to a lake as being most likely to contribute to a rapid drainage event. This value is also in agreement with field verified estimates of the relative vertical accuracy (~0.5 m) of the DSM dataset around Utqiaġvik (formerly Barrow) (Manley et al., 2005) and the stated vertical RMSE (~1.0 m) of the DSM data (Intermap, 2010). Development of the potential lake drainage dataset involved several processing steps. First, lakes were classified as potential future drainage candidates if the difference between the elevation of the lake surface and the lowest elevation within a 100 m buffer of the lake shoreline exceeded our chosen threshold of 0.6 m. Next, we selected lakes with a minimum size of 10 ha to match the historic lake drainage dataset. We further filtered the dataset by selecting lakes estimated to have low hydrological connectivity based on relations between lake contributing area as determined for specific surficial geology types and presented in Jones et al. (2017). This was added to the future projection workflow to isolate the lake population that likely responds to changes in surface area driven largely by geomorphic change as opposed to differences in surface hydrology. Lakes within a basin with low to no hydrologic connectivity that had an elevation change gradient between the lake surface and surrounding landscape are considered likely locations to assess for future drainage potential. Further, the greater the elevation difference, the greater the drainage potential. This dataset provided a first-order estimate of lakes classified as being prone to future drainage. We further refined our assessment of potential drainage lakes by identifying the location of the point with the lowest elevation within the 100 m buffer of the lake shoreline and manually interpreted lakes to have a high drainage potential based on the location of the likely drainage point to known lake drainage pathways using circa 2002 orthophotography or more recent high resolution satellite imagery available for the Western Coastal Arctic Plain (WACP). Lakes classified as having a high drainage potential typically had the likely drainage location associated with one or more of the following: (1) an adjacent lake, (2) the cutbank of a river, (3) the ocean, (4) were located in an area with dense ice-wedge networks, (5) appeared to coincide with a potentially headward eroding stream, or (6) were associated with thermokarst lake shoreline processes in the moderate to high ground ice content terrain. We also added information on potential lake drainage pathways to the high potential drainage dataset by manually interpreting the landform associated with the likely drainage site to draw comparisons with the historic lake drainage dataset.