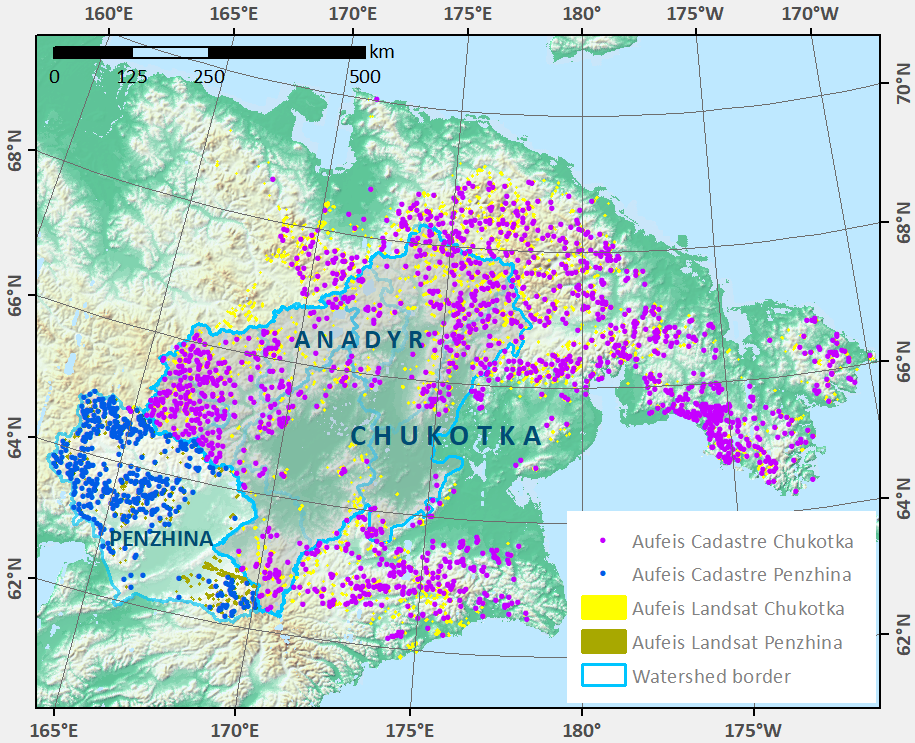 The GIS database contains the data of aufeis (naled) in the Chukotka region from historical and nowadays sources, and complete ArcGIS 10.1/10.2 and Qgis 3* projects to view and analyze the data. All data and projects have WGS 1984 coordinate system (without projection). ArcGIS and Qgis projects contain two layers, such as Aufeis_kadastr (historical aufeis data collection, point objects) and Aufeis_Landsat (satellite-derived aufeis data collection, polygon objects).

Historical data collection is created based on the Cadastre of aufeis (naled) of the North-East of the USSR (1958). Each aufeis was digitized as point feature by the inventory map (scale 1:2 000 000), or by topographic maps. Attributive data was obtained from the Cadastre of aufeis. According to the historical data, there were 2024 aufeis with a total area 2976.9 km² within the studied area.

Present-day aufeis dataset was created by Landsat-8 OLI images for the period 2013-2019. Each aufeis was delineated by satellite images as polygon. Cloud-free Landsat images are obtained immediately after snowmelt season, to detect the highest possible number of aufeis. Critical values of Normalized Difference Snow Index (NDSI) were used for semi-automated aufeis detection. However, a detailed expert-based verification was performed after automated procedure, to distinguish snow-covered areas from aufeis and cross-reference historical and satellite-based data collections.

According to Landsat data, the number of aufeis reaches 2758, with their total area about 1147.1 km². The difference between the Cadastre (1958) and the satellite-derived data may indicate significant changes of aufeis formation environments.