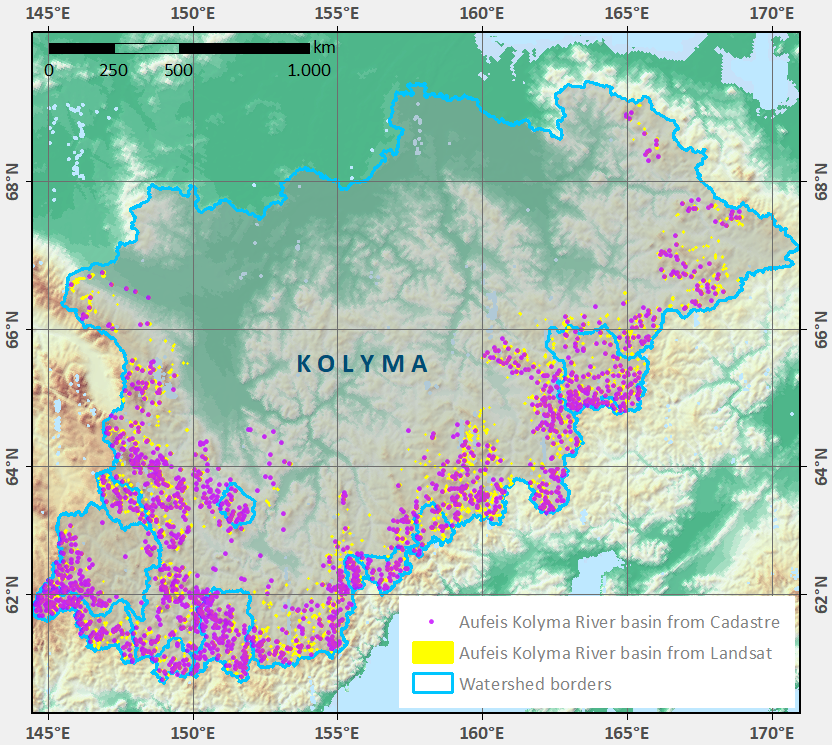 The GIS database contains the data of aufeis (naleds) in the Kolyma River basin (Russia) from historical and nowadays sources, and complete ArcGIS 10.1/10.2 and Qgis 3* projects to view and analyze the data. All data and projects have WGS 1984 coordinate system (without projection). ArcGIS and Qgis projects contain two layers, such as Aufeis_kadastr (historical aufeis data collection, point objects) and Aufeis_Landsat (satellite-derived aufeis data collection, polygon objects).

Historical data collection is created based on the Cadastre of aufeis (naled) of the North-East of the USSR (1958). Each aufeis was digitized as point feature by the inventory map (scale 1:2 000 000), or by topographic maps. Attributive data was obtained from the Cadastre of aufeis. According to the historical data, there were 1755 aufeis with a total area 1945.2 km² within the studied basin.

Present-day aufeis dataset was created by Landsat-8 OLI images for the period 2013-2019. Each aufeis was delineated by satellite images as polygon. Cloud-free Landsat images are obtained immediately after snowmelt season (e.g. between May, 17 and June, 16), to detect the highest possible number of aufeis. Critical values of Normalized Difference Snow Index (NDSI) were used for semi-automated aufeis detection. However, a detailed expert-based verification was performed after automated procedure, to distinguish snow-covered areas from aufeis and cross-reference historical and satellite-based data collections. According to Landsat data, the number of aufeis reaches 2216, with their total area about 879.7 km². The difference between the Cadastre (1958) and the satellite-derived data may indicate significant changes of aufeis formation environments.